This silver-gray noble metal is used as the substrate for all our plating due to its properties. It is hard and resistant to oxidation. It belongs to the group of platinum rhodium, ruthenium, iridium and osmium form a group of elements referred to as PGMs. These have similar chemical properties, but palladium has the lowest melting point and is less dense than the others. The name was given by William Hyde Wollaston in 1804 and comes from the asteroid "Pallas", who was discovered two years earlier. The asteroid is named after the salutation of "Athena Pallas", goddess of the ancient Greeks, which acquired that name when he killed Pallas (Giant). 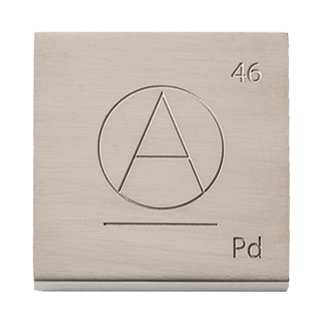